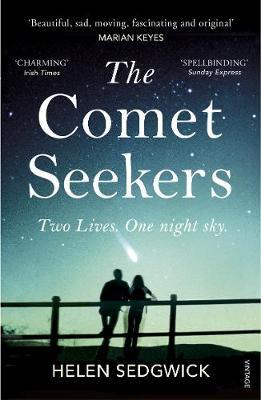 Róisín and François first meet in the snowy white expanse of Antarctica, searching for a comet overhead.

While Róisín grew up in a tiny village in Ireland, ablaze with a passion for science and the skies, François was raised by his restless young mother, who dreamt of new worlds but was unable to turn her back on her past.

As we loop back through their lives we see their paths cross as they come closer and closer to this moment, brought together by the infinite possibilities of the night sky.

I’ll admit that I wasn’t actually looking for something new to read when I came across this book. I was in a shop in town, browsing the books for my kids when my attention was caught by the adults section, and by a cover with two shadowy figures and a comet overhead. I picked it up, read the blurb and thought, ‘hmm, intriguing’. I wasn’t wrong.

This is a story which draws the reader in from the very start. Beautifully structured, each chapter loops through time and characters at a pace which is impressive but never confusing. The focus of the story is on Francois and Roisin, and those in their lives, past and present, and how they both arrive at a moment in Antarctica, gazing at the night sky.  Written in the third person present tense, each part of the story takes place when there is a comet visible overhead. As the reader comes to learn, the comets are the tethering link between all characters, the living and the dead.

If the well-structured plot drew me in, then it was the style which had me hooked. Sedgwick has a masterful ability to express a great deal of beauty in just a few words. Her poetic descriptions of comets and of the universe are clearly heartfelt, while the picture she paints of each character is deep and perceptive. All this results in a story which is sincere, engaging, and a considerable emotional rollercoaster for the reader. There are parts of this story which made me smile, and equally parts which made me feel as though I could weep. And I suppose that’s the point.

An impulse buy which I’m very glad I made. Five stars.